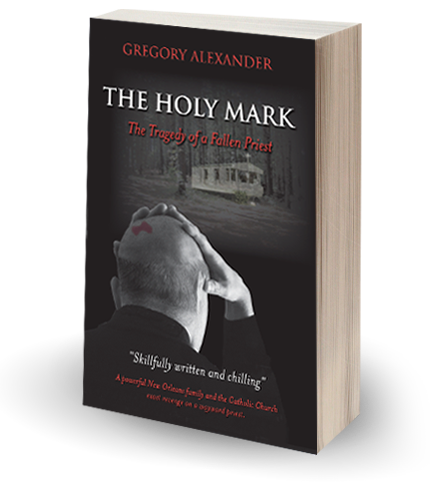 The novel that turns the Catholic Church clergy abuse scandals upside down through the voice of an unforgettable character.

“Skillfully written and chilling” is how Staige Blackford, long-time editor of the Virginia Quarterly Review, described “The Holy Mark,” the short story on which Gregory Alexander’s stunning debut novel is based.

Father Tony probably should have never been a priest.  With his family’s money, courtesy of ties to the New Orleans mob, he could have pursued his interest in literature or even worked with young boys—only free of all those silly Church strictures. But there was no priest in the Miggliore family, much to the shame of his immigrant Italian grandmother.  So at his birth, when the old woman beheld a peculiar mark on his head and declared it to be a sign from God—a “segno sacro” in the only language she knew—this grandson’s destiny was set.

Those marked by God, though, are often marked by men as well:  Father Tony’s jealous uncle will never forgive him for finding favor with the Miggliore matriarch.  And with his ties to the city’s Catholic hierarchy, he’ll plot to destroy his nephew if it takes the rest of his life.  Meanwhile Father Tony is determined to outwit his uncle and the Church, even if he has to conceal his identity and prowl the streets of New Orleans by night to do it.

A shocking novel of family, power, and revenge, The Holy Mark is the story of one reluctant priest caught between the cynicism of his own Southern upbringing and the political machinations of the Roman Catholic Church.

“Irresistible, profoundly compelling. . . A brilliant portrait of a sick mind that contains truths about all minds. . . A hugely powerful and unique book”   –Anne Rice

“Disturbingly memorable. . . Father Tony endears himself to readers with charm and candor from the opening pages.”  —Publishers Weekly

“The dynamics of power and family, faith and politics, revenge and regret all mired together. . . . In this psychological thriller about a predator and victim in one, Alexander manages to indict the Church as much as the priest.”  —The Advocate Magazine (one of their “15 Best LGBT Summer Reads”)

“Beautiful and unnerving. . . .The book’s greatest strength is its presentation of the Miggliores, [Father Tony’s] Sicilian family, whose greed, judgment, and jealousy define his station in Louisiana culture. . . . The result is a plot rife with politics, taboo, and shame . . . evidence of the author’s keen understanding of grotesqueness and sentimentality.”   —Southern Literary Review

“A horror novel of the human soul”  —Country Roads Magazine

“Explores the workings of a church in flux and the nature of same-sex relationships in the confines of a very heteronormative environment bravely and without compromise.”  —Frontiers Magazine (Los Angeles)

“Father Tony is a wretchedly believable character, skillfully realized and as beguiling and charming on the page as he must be with his victims. . . .Certainly one of the more fascinating and disturbing books I’ve read in a long while.”   Eric Page, Gscene Magazine (UK)

“A very compelling read. . . the prose both beautiful and informative, a book that makes one think and feel.”   —Outword Magazine (Sacramento)

“Challenging, difficult, eye-opening, and exciting . . . a book that can challenge your thoughts.”     —Baltimore Out Loud

“Alexander has written a disturbing look into the mind of a man whose delusions of grandeur have coalesced into a bitter husk. . . . A profound and realistic account of the scandals of the Catholic Church.”  —OutSmart Magazine (Houston)

“If you’re looking for insight into the disturbed thinking of a pedophile priest . . .what comes through is a chilling, straightforward account of Father Tony’s experiences and his skewed view of how it is all right.”   —The Humanist

“The Holy Mark is a fine work of psychological depth and complex effect. . . a unique tour de force, a glimpse into a world that is new and strange and amazing.”   –Moira Crone, author of The Not Yet and The Ice Garden

“A fine and accomplished piece of work. Father Tony is a skillfully wrought creation. . . .The brilliance of The Holy Mark is that it refuses to give the Church and its leadership a pass, even as it condemns the actions of the individual priest. . . Bravo!     –Fredrick Barton, author of With Extreme Prejudice and A House Divided

“As psychological character studies go, this piece is unimpeachable, one of those rare books that really manages to justify the concept of literary fiction as an entity unto itself. It is, in a word, effortless.”  –TheReviewHart.com (their first ever 5-star review)

“A great contribution to the understanding of this epic clerical problem.”     –Richard Sipe, author of Sex, Priests, and Power: Anatomy of a Crisis

“A remarkable portrayal of Italian-American culture and family dynamics. Alexander pulls off the neat trick of making Father Tony physically unattractive yet charismatic, able to seduce young boys as well as he’s seduced this reader.”      –Clayton Delery-Edwards, author of The Up Stairs Lounge Arson

“Extremely well written, fascinating as it is disturbing . . .  Father Tony is a complex, charismatic, highly believable character . . .  a chillingly authentic predator. . . . The real power of the novel comes from its brilliant characters and its intimate look inside the mind of a deviant.”  —Underground Book Reviews

“A vivid portrait of New Orleans past. . . .For those interested in a well-wrought world of deviance and tradition, The Holy Mark is on target.”     —New Orleans Living

“Gripping and interesting. . . A sad, touching story about an essentially good man.”  –Fred Kaplan, author of Dickens: A Biography and Henry James: The Imagination of Genius

“Ranks right up there with the novels of Andrew Greeley.” –Anson Shupe, author of Rogue Clerics: The Social Problem of Clergy Deviance

“Alexander crafts a true page-turner. . .neither judgmental nor celebratory . . .full of both intrigue and detail.” —L’Observateur

“Gregory Alexander is a brave writer—he takes on the church and exposes it through Father Tony.  Perhaps that is what makes this such a fascinating read—the reality that it gives us. The human condition is on trial here, and the reader can deliver the verdict.”        –Amos  Lassen

Buy the Book from Amazon

Buy the Book from Barnes & Noble